Congratulations to all Dunnes workers

Posted on July 8, 2014 by mandatetradeunion 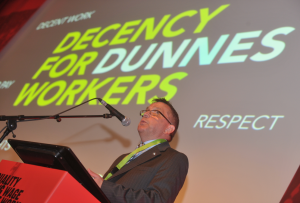 Well done to all Dunnes Stores workers for achieving the first win of our Decency for Dunnes Workers campaign.

Yesterday Dunnes Stores management announced a 3% pay increase, a concession that formed one part of our claim.

Obviously Dunnes Stores has been paying attention to the growing momentum in our campaign and this pay increase goes some of the way towards achieving our overall objectives.

We must now build on this victory!

Across the country, Dunnes workers have been attending meetings and driving our campaign. It is because of your activism and due to your efforts to organise your fellow workers that Dunnes management have given in to one of your first demands. We must now ensure that we achieve the rest of them, including:

This is your victory

Dunnes Stores workers have won this victory by getting organised and mobilizing within their workplace. The only way in which workers achieve significant change and improve conditions of employment is by standing together within your union.

While this victory is to be celebrated, we must not ease up on efforts to achieve all of our demands. Remember, we’re stronger together.