Posted on December 18, 2015 by mandatetradeunion

Mandate Trade Union has today (Friday, 18th December) said that Dunnes Stores workers’ conditions of employment have improved in recent months but the company still hasn’t guaranteed staff the hours they work on a regular basis.

An online survey of 1,300 Dunnes Stores workers in 103 separate stores shows that staff are now regularly working a significant number of hours above their contractual minimum of 15.

The survey results show that:

On foot of this information Mandate say Dunnes management should give their workers new contracts that reflect the hours they actually work which could be done at no extra cost to the company.

Gerry Light, Mandate Assistant General Secretary said, “We believe that our ongoing Decency for Dunnes Workers Campaign is having a positive impact. As part of the campaign our members in Dunnes took industrial action in April and held a national march to Dunnes head office in June. Since then things appear to have started to take a slight turn for the better for them.”

He explained, “Members have indicated that the company has not taken on as many additional staff and fewer on temporary contracts resulting in additional hours for existing staff in many cases. The situation is still far from the certainty of hours and earnings Dunnes workers deserve, but it is an overall improvement worth acknowledging.

Mr Light said the workers have also won a 9 percent pay increase over three years and that, together with the increase in hours, is making a big difference to the living standards of many Dunnes Stores workers.

“Someone appears to be listening in Dunnes Head Office with a number of the core demands of the ongoing Decency for Dunnes Workers Campaign being realized,” he said.

Mr Light continued by calling on the company to do the right thing by their employees this Christmas.

“What the Dunnes workers are seeking is very reasonable,” he said. “They want income security and peace of mind that they can earn a decent wage from week to week to provide for themselves and their families. What better time of the year for Dunnes to take the next step and do the decent thing by giving these workers a new contract that reflects the hours that they are actually working, which if implemented would give them some certainty of earnings.”

Mr Light also said that the Dunnes workers realise that without new contracts, the improvements are temporary and can be taken away at the discretion of the company.

“While these improvements for Mandate members in Dunnes are evident, members know that they can be taken back as quickly as they have been given. This is why our members in Dunnes will be pressing ahead through their Union with a claim for certainty of hours and earnings under the newly enacted Industrial Relations (Amendment) Act 2015.

Mr Light concluded, “Mandate has already written to the owners of Dunnes seeking a meeting with management, as is required under the Union’s existing 1996 national procedural agreement with the company.  If there is no meaningful engagement from the company, the referral to the Workplace Relations Commission under the new legislation will most likely happen in January 2016.”

For a full Mandate member update please click on the below link. 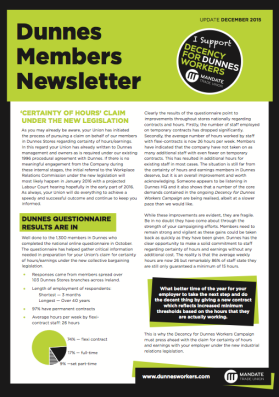