Posted on February 13, 2018 by mandatetradeunion

Mandate Trade Union has today (Tuesday, 13th February 2018) cautiously welcomed the publication of the Employment (Miscellaneous Provisions) Bill 2017 but says “significant amendments are needed if it is to address concerns of low hour contract workers.”

The aim of the Bill is to stop the exploitation of low hour contract workers and to allow all workers security over their hours and their incomes.

Brian Forbes, Mandate’s National Coordinator for Campaigns said: “Mandate members all across the country should feel very proud, particularly Dunnes Stores workers who started this debate when they took industrial action back in 2015. Our members have forced the government to this point through their political lobbying and pressure on TD’s all across the country.

He added, “While this draft of the Bill doesn’t go far enough, we now know exactly what flaws the Bill has and what amendments are needed.”

Mandate and the Decency for Dunnes Workers campaign have been calling on all TD’s to sign the Secure Hours = Better Future charter – which sets out the minimum standards needed in any legislation in order to ensure workers have secure hours and incomes.

The charter has six key demands, and to date, dozens of TD’s from all political parties have signed up to its demands.

Mr Forbes said: “On the day of the Dunnes Stores strike almost three years ago, all parties turned up to the picket lines. All TD’s – including the Taoiseach – stood up in the Dail and said they supported the Dunnes Stores workers in their quest for decency at work. Now, after too long of a delay, we are starting to see the finishing post and it’s important that we keep the pressure on.”

Mandate will be continuing to lobby TD’s across the country and if you would like to join one of the local lobbying teams, contact bforbes@mandate.ie 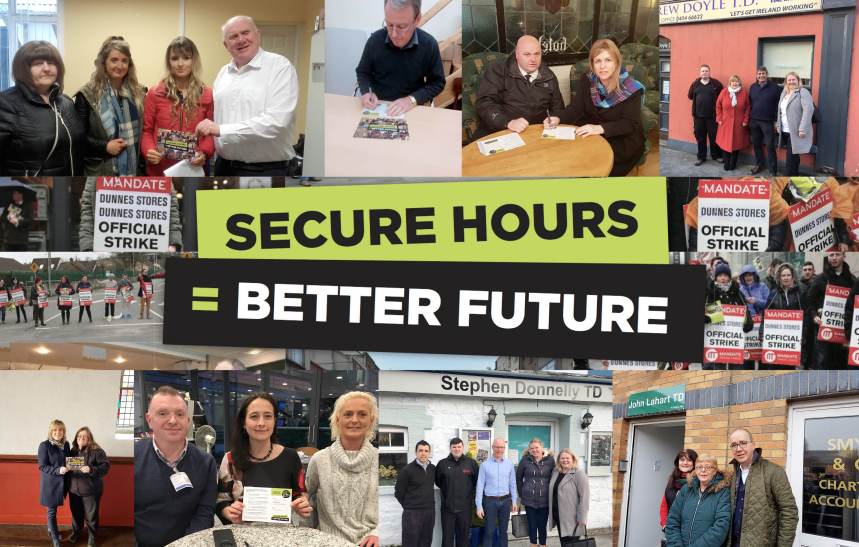